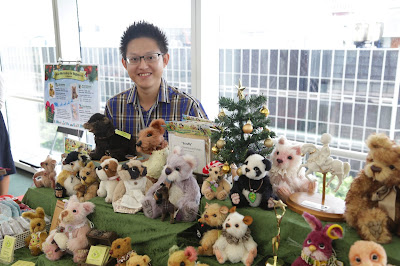 Hi, I’m Wayne Lim - an award winning soft sculpture artist residing in Singapore with my family, whom I owe a big thank for being very supportive of my work. I started making teddy bears in 2009 and I named my creations as “Wayneston Bears”. One of the reasons why I enjoy bear-making is it allows me to express my thoughts and ideas through the craft. “Wayneston” is a carefree town in a fantasy world where happy bears and critters live in harmony. I believe that the teddy bear is a piece of art which enables the mood of the artist to be portrayed at the time of its creation. Its symbolism of peace and happiness should be passed on to our loved ones.
My works have been featured in various publications and media in: Australia, Germany, Holland, Japan, Russia, Singapore, United Kingdom and United States.

Wayneston Bears have been adopted by collectors from all over the world such as Australia, Canada, China, Finland, Germany, Malaysia, Singapore, Japan, South Africa, South Korea, Spain, United Kingdom and United States.
My works have been featured on: