On 25 February, a new bunny was born from the creative hands of her proud mummy, Hui Chien!

It was Hui Chien's first time making a Teddy Bear/Bunny. Before Hui Chien started, Wayne share with her tips to create a good bear. Following that, Wayne taught her the basic sewing and jointing techniques. 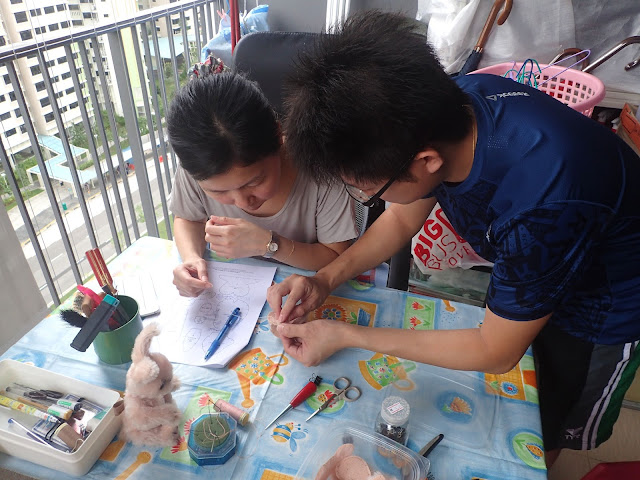 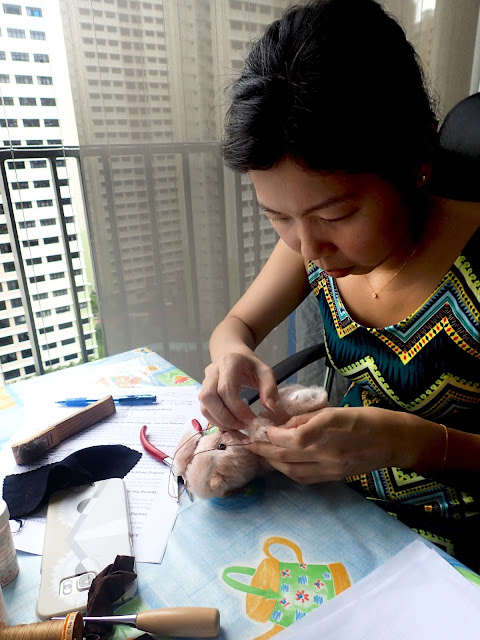 Wayne also demonstrated how to make wired ears for the bunny. Hui Chien was a fast learner and very attentive during the workshop.
The other student, Winnie was back to make her 3rd creation under Wayne's guidance. She had previously attended the Mouse workshop. This time, she brought along a piece of brown mohair which she previously purchased from Wayne to make the bunny. This was a refresher course for her as she needs to recall some of the steps to joint the bunny. 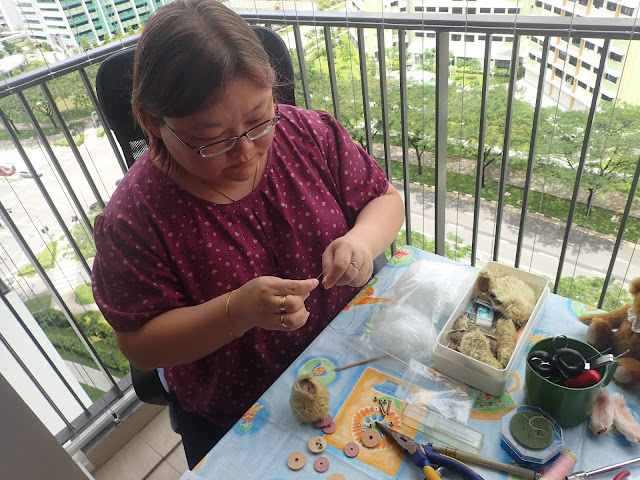 It was a wonderful 2-session workshop with Hui Chien and Winnie. We had lots of fun chatting about our crafts, hobbies and interests.

Well done to Hui Chien for completing her very first bunny! We have lots of "likes" on Facebook after sharing them on various social media platforms. Due to personal commitments, Winnie was unable to complete her bunny. She will finish the bunny at home and share pictures with us after she has completed it.
We look forward to seeing them again next time with their new creations!
Hugs,
Wayne
Posted by Waynestonbears at 9:23 PM No comments:

Zubin is now available for adoption!

Remember Zubin, a bear we create specially for the Christmas competition last December? He won the 2nd place in the competition and is made from our dear friend, Margaret Burke's bear pattern. 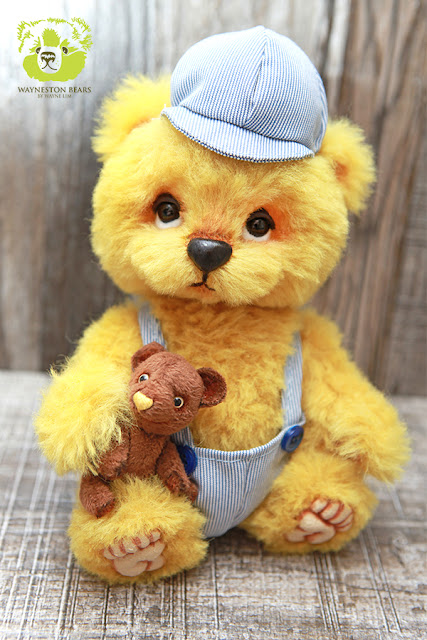 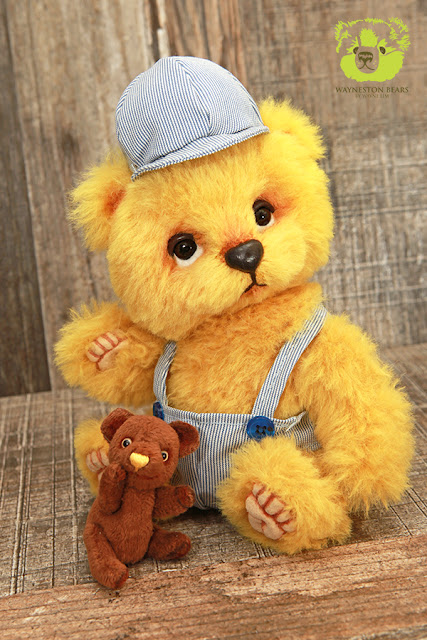 Zubin is made from ultra soft Japanese Alpaca and he has a little bear friend as a companion. His outfit is specially designed to fit him.

Zubin has stayed with us for awhile, and we feel that now is the time for him to find a new loving home!

We are pleased to announce that he is now available for adoption on our website.

By the way, please stay tuned for our Anniversary blog give-away!
We would like to thank you for your continuous support and joining our mailing list!

Have a wonderful week!

Hugs,
Wayne
Posted by Waynestonbears at 11:06 PM No comments:

Winnie invited us to her place for a Lunar New Year Gathering 2 weeks ago. When we arrived, Winnie showed us her collection of jewelery which she had made herself! They were all intricately done and we were amazed by her handiwork! 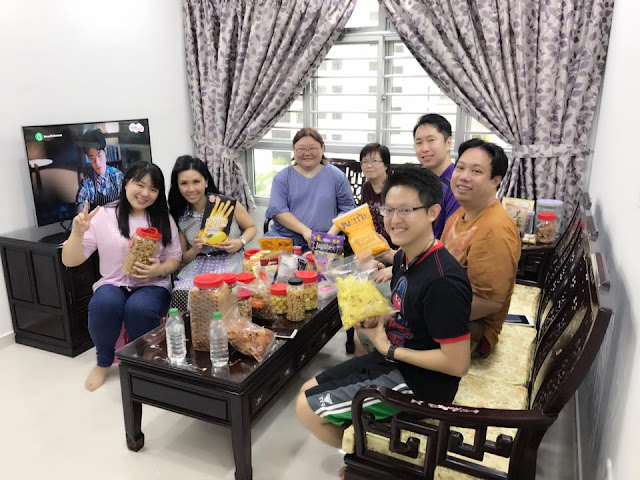 We all made ourselves at home as we sat down to talk while waiting for the rest to come. Winnie had many New Year goodies and we couldn't resist helping ourselves the snacks! 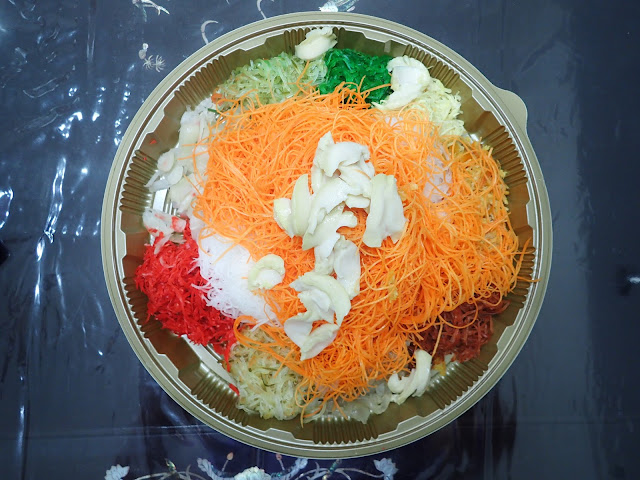 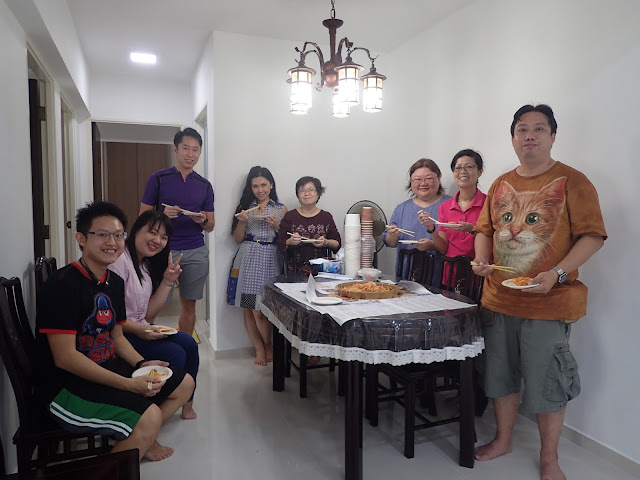 Once everyone arrived, we started with the "Lo Hei" aka "Yusheng"! Also known as the Prosperity Toss in english, it is a Cantonese style raw fish salad comprising of shredded vegetables, raw fish (usually Salmon), pomelo, pickled ginger, crackers, and a variety of condiments. The Chinese believe that having this dish is considered a symbol of abundance, prosperity and vigor. 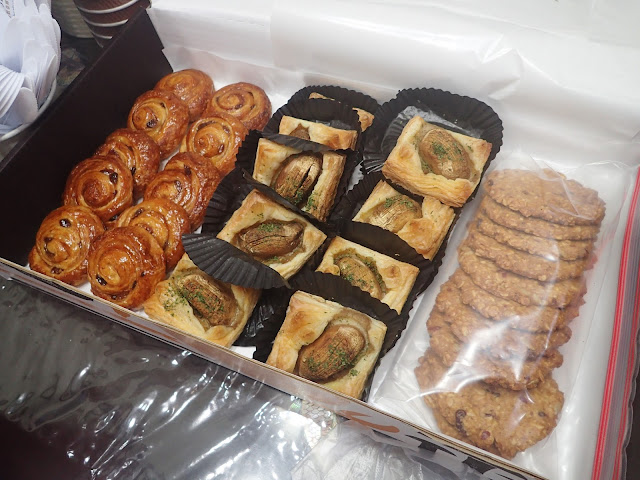 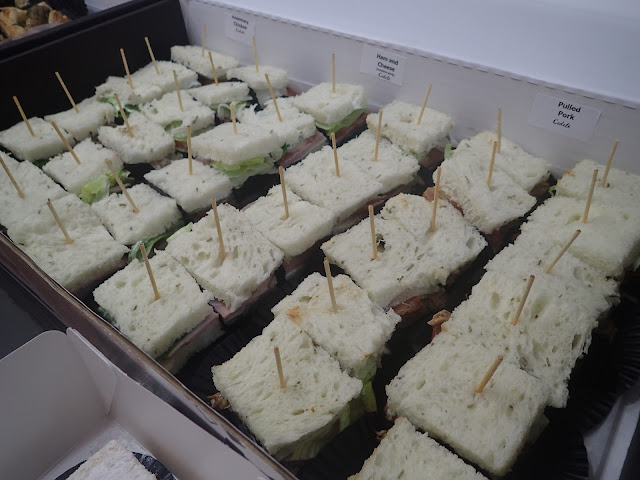 After eating the "Yusheng", we had Cedele for lunch! Winnie had generously ordered a variety of sandwiches and pastries for us! She also made ice jelly for dessert!

We all had a great time and enjoyed the fellowship together. Thank you Winnie for hosting us and we look forward to our next Teddy Bear group gathering!
Hugs,
Wayne
Posted by Waynestonbears at 9:01 PM No comments:

Before Anna's return back to Russia, the Singapore Teddy Bear Lovers had a farewell dinner held at Kallang Wave Mall's Aji-Ichi. 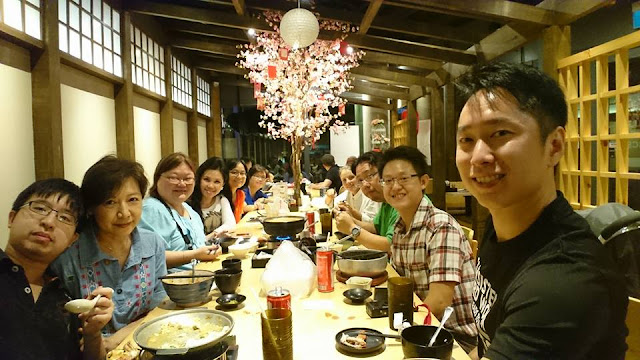 We enjoyed the good food and company. We were pleasantly surprised that the restaurant was spacious and quiet! It is ideal place for us to hold our gathering the next time! 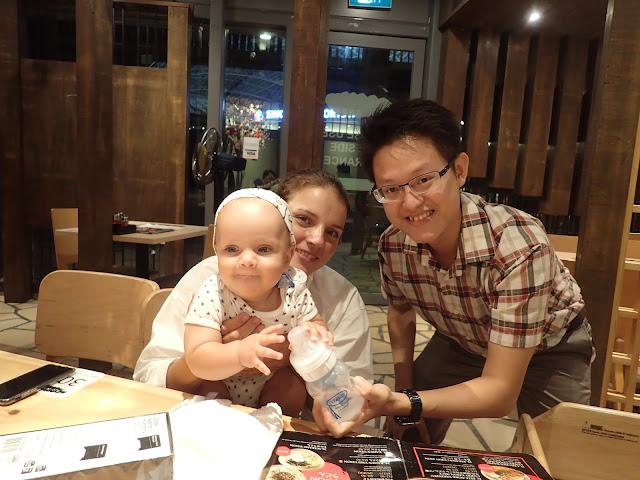 We were excited to meet our little friend, baby Peter again who is just 6 months old. Wayne quickly took the opportunity to have a picture taken with him. Anna's husband Andre wasn't able to join us due to work. 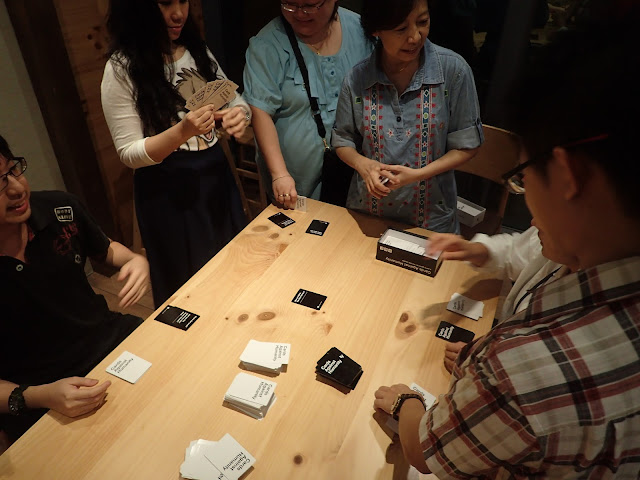 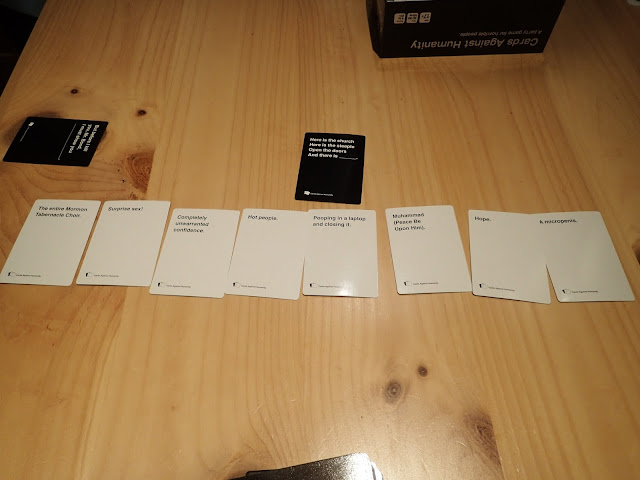 After dinner, Paula introduced us a game known as "Cards against Humanity". The game was hilarious and the place was soon  filled with laughter. Everyone laughed at the different ridiculous answers given by everyone and we were glad that Anna enjoyed the game too!
At 10pm, we bade goodbye to Anna and Peter. We hope to see them soon again in Singapore the next time......  or perhaps in Russia!
Hugs,


Wayne
Posted by Waynestonbears at 10:25 PM No comments:

Singapore Teddy Bear Club is on Channel 8 one year ago!

Wow, time flies! We've just got a Facebook memory sharing Singapore Teddy Bear Club's feature on Channel 8 last year and thought it would be good to share it here again with everyone!

Below is the link to the clip, hope everyone will enjoy and join us on Facebook!


Have a great weekend!

Hugs,
Wayne
Posted by Waynestonbears at 11:26 AM No comments:

We had a wonderful Korean Steamboat dinner at Esther house last weekend! 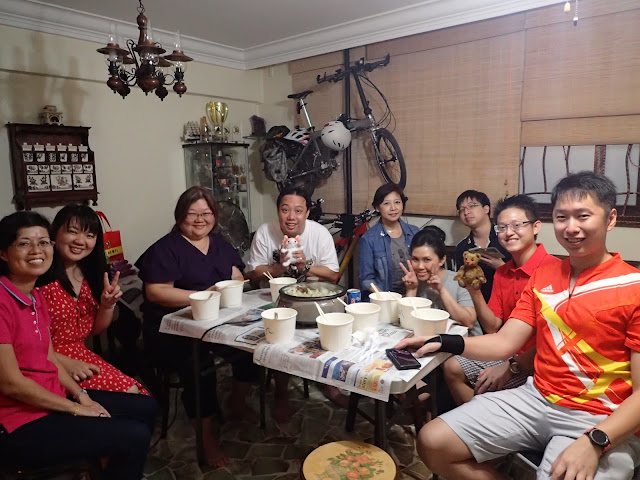 Esther's cat Sasha, has a lovely pair of eyes and one was sleeping on the bench ignoring us while the younger cat Sammy was hiding in the room!

Esther showed us her bear collection and we were all in awe by her huge collection!

She has lots of cats and dolls in her show case cabinets and her workroom was very neat and tidy.

Esther also hang and displayed her mohair and fur on clothes racks to prevent creases.
She served us her handmade Korean stew and pour it on the Hotpot filled with filled with a variety of ingredients such as rice cake, cheese bean curd, noodles, mushrooms and assortment of vegetables. After boiling for a while, we all started eating. The food was very good and the stew had a sweet taste which was very delicious! 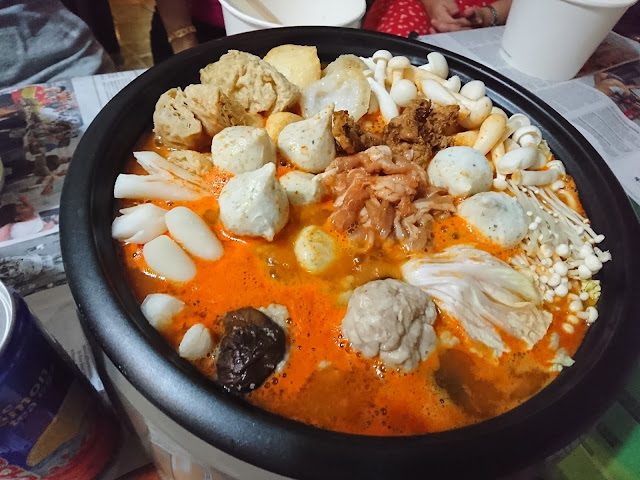 After dinner, Wayne and Esther took a picture together to celebrate their 6 years of friendship! Coincidentally, it was exactly the same day 6 years ago when Wayne had a bear swap with Esther at her house! 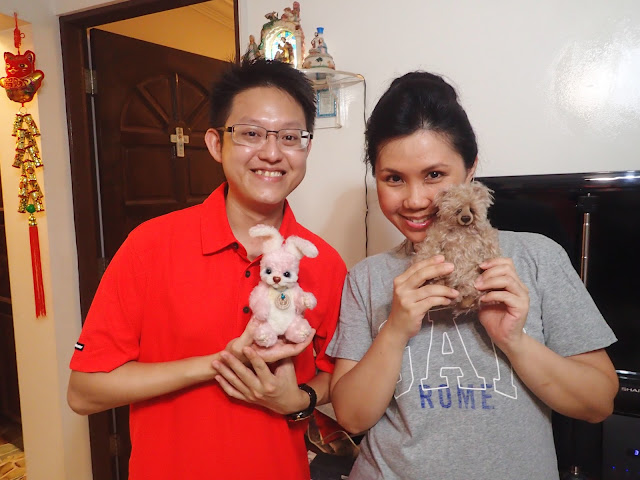 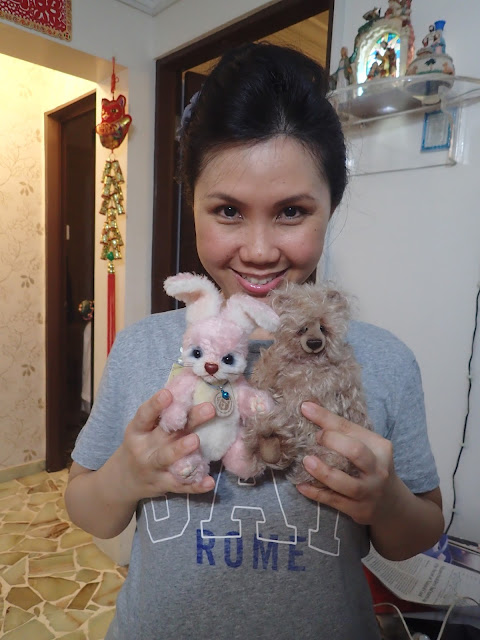 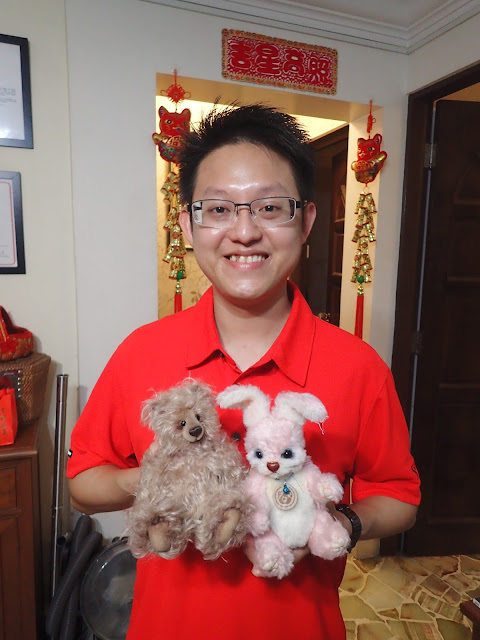 We would like to thank Esther for inviting us to her lovely house and the scrumptious dinner.

We look forward to our next gathering at Winnie's house next week! 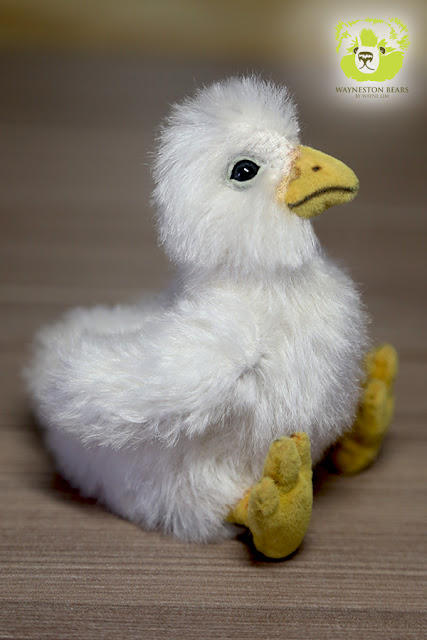 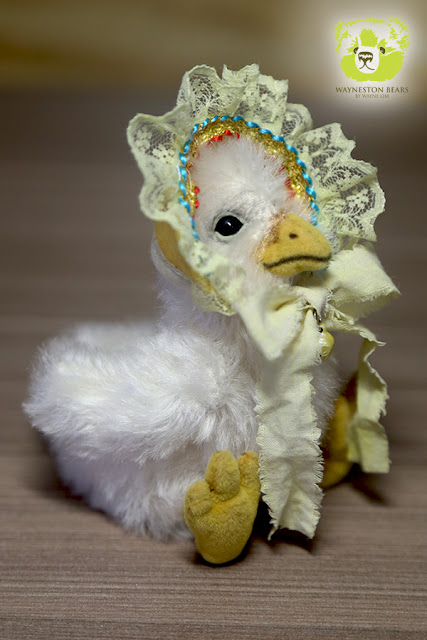 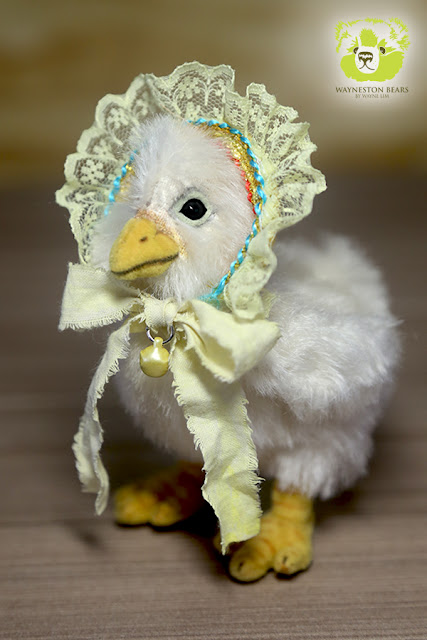 Hugs, Wayne
Posted by Waynestonbears at 5:06 PM No comments: