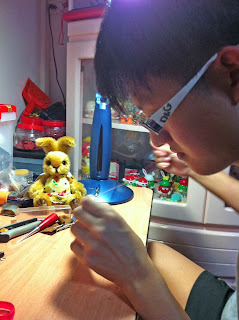 Are you curious about the making of Wayneston Bears and what an Artist Bear is? Let me share more about us on this page ^.^

Each Wayneston Bears is designed and carefully hand crafted by me, Wayne Lim using the finest and highest quality materials to create a beautiful bear. The different types of fur used to create Wayneston Bears are Mohair, Alpaca and sometimes high quality faux fur.


Mohair is produced from the Angora Goat and Alpaca fur actually comes from an animal called an "Alpaca" - though they look quite similar to a Llama, but they are not the same! Both types of fur come in a large variety of colours, textures and densities. They have a woven backing and therefore it has minimal stretch upon stuffing. Mohair and alpaca can last for many generations, you can even pass the bear to your great grand children! 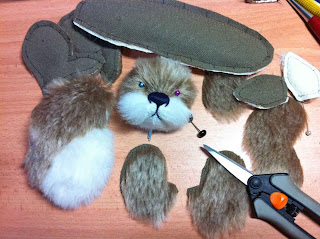 Bear making is a time consuming process. It includes drawing of the design, tracing and cutting the design onto the fur, sewing, stuffing, trimming, sculpting, felting, final touches and photography. I work on my bears usually at night after my day job, each day I spend approximately 3 hours on my bears. All bears / animals are original and designed by me from scratch and are handmade with love. Each creation is One-of-kind and cannot be replicated. The stuffing material on each bears/animals are polyfill, glassbeads and crush garnets. These stuffings give Wayneston Bears a hefty weight and a soft cuddly feel.

Wayneston Bears view the world with German Glass Eyes. Occasionally I will also create hand-painted clear glass eyes with glitters to give them a magical and enchanting look.
﻿﻿
﻿﻿The arms, legs and head are jointed, which means that they are moveable. The limbs are jointed with hardboard disks and hardware such as washers, bolts and lock nuts, whereas T-pins are used for the head. Sometimes, I also use cotter pins to create wobble head joints. 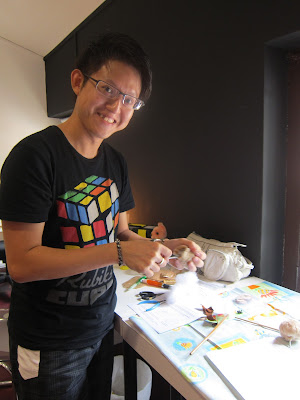 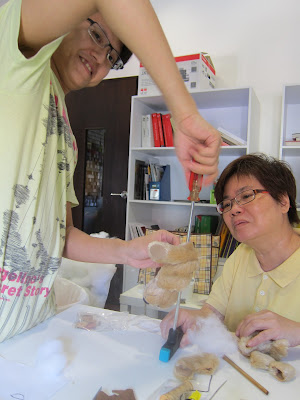 Wire-armatures or loc-line armatures are used on some of my creations too. They act like skeletons for the bears to make them more posable.

As I mentioned above, artist bears have small parts as such eyes and joints etc, they are not suitable for children. Artist Bears are collectable items for adults.

What is an Artist Bear? 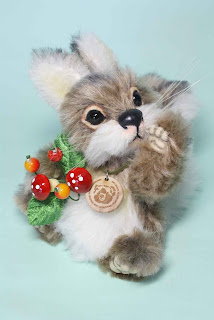 Artist Bears are bears created by bear artists like myself, someone who designs and makes bears from scratch. After years of researching, experimenting and creating teddy bears, each artist will developed their own unique style, personal preference and incorporate various techniques to their bears to make their bears different. In other words, these personal touches given to the bear will develop a "Signature Look",  therefore many times by looking at a specific bear, you will have know that this bear has been created by a specific artist.

Unlike manufactured bears, artist bears are soulful and filled with personality. Some even say that they are able to communicate with you. A teddy bear is no longer just a toy - it has now become an art piece, maybe a form of therapy that creates the art of healing.

Interesting Facts / Myths about Bear Making
Do you know that even an experienced artist can't determine the making of a male or female bear from the start? Interestingly, I have asked many of my bear friends and have discovered this. Some of the artists can only make boys whereas some only make girls. For myself, I can only determine their gender after I complete everything, trust me... the bear will tell you if he is a boy or a girl then you can considering dressing him/her up!

I do believe that the emotions of an artist is portrayed on their bears. All the 5 senses are infused into our creations inadvertently. I have seen and heard some artist's bear look like their creator or even look like their children! Ironically, look around and you might find resemblance between the artist and their bears! =)

History of Teddy Bears
Have you ever wondered how the name of Teddy Bear comes about?
Teddy Bear is named after United States 26th President, Theodore Roosevelt. "Teddy" was Roosevelt's nickname. It happened on November 1902 when President Roosevelt was hunting in Mississippi. On that day, he had  failed to make a kill so his hosts caught a bear cub presenting it to him as a target. The President refused and uttered "Spare the bear!, I will not shoot a tethered animal."  A Political Cartoonist, Clifford Berryman drew a cartoon of the scene (Drawing the Line in Mississippi), which was published in the Washington Post had made the cartoon successful and had provoked a huge public response. This had inspired a toy maker named Morris Michtom to produced his own bear toy named "Teddy" which was granted permission from the President.

In 1905, bear making factories sprung up. Companies such as Steiff, The Ideal Novelty and Toy Co., Chad Valley, Chiltern and Farnell are the few of the early companies that started manufacturing bears.


Thank you for reading this page, I hope you have already know more about us.