Hugglets is well known for hosting 2 Teddy Bear Festivals at Kensington Town Hall each year; namely "Winter Bearfest" in February and "Teddies" in September. Both events are always well received by Teddy Bear Artists and collectors alike. In addition, Hugglets also produce the annual UK Teddy Bear Guide and has a large database of Teddy Bear Makers listed on their website. 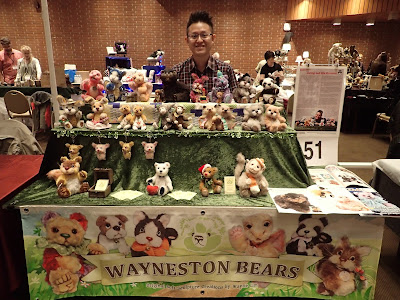 We are very honoured and excited to participate in Teddies 2016 this year. It is our first time visiting UK and participating in a Teddy Bear event at the same time! Held at Kensington Town Hall on 11 September, there were over 170 stands of participating Teddy Bear Artists and Dealers in the 4 allocated halls. The layout of the tables was good as there was a lot of room for visitors to maneuver around. 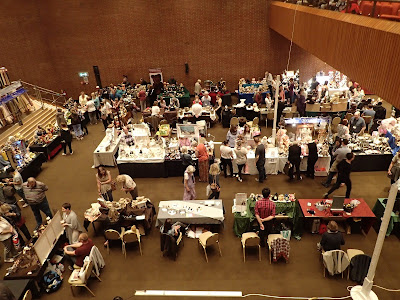 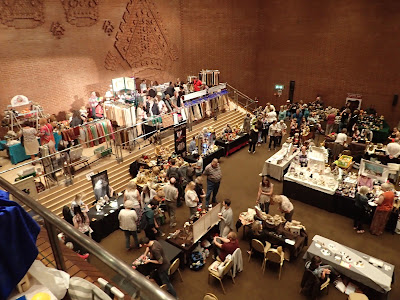 As we wanted to walk around and see other participating artists/dealers tables, we reached Kensington Town Hall at 9am to do the setup. We were surprised when some artists recognised and greeted us when they saw us. At the same time, we were also thrilled to meet many popular artists at the show and most of them have been in the industry for more than 10 years! We were pleased to meet some of the reputable artists namely, Wendy and Megan Chamberlain (UK), Allen Hsu (USA), Andrea Maria (Austria), Sandra Piper (UK), Dagmar Seibel (Germany), Lanie Edwards (UK), Frank Webster (UK), Jane Mogford (UK), Susan Donaj (UK), Christina Metcalfe (UK), Art Rogers (USA), Marina Osetrova (Russia) and many more!


Some of the bear artists whom we met in the July's Japan Teddy Bear with Friends Convention, Vera Vlasova (Russia), Masako Kitao and Sayo Sato (Japan) came to the show too!

It's really amazing having few of our "Virtual Reality Friends" from Facebook walked up and say "Hi" to us. Initially, we looked stunned because we don't really know who they were. Wayne apologised and asked for their names, before realising that they have been Facebook friends for many years! Please use your real photo for the Facebook profile and not your bear photo so we can recognise you! LOL!
We were also happy to have met Allen Hsu and his friends from USA. Allen is a Taiwanese who is now based in USA. He warmly invited us to pay him a visit should we travel to US someday and he would show us around!

Sandra Piper (Skye Rose Bears) was really friendly! She came to our table and said "Hi"! Lynnie Bowie (Madabout Bears) took a selfie with Wayne and immediately posted it on Facebook! Wayne also met Andrea Maria (Dreli-Bears), who makes Teddies, Dragons and Seahorses! We met Wendy & Megan Chamberlain (Essential Bears) face to face at the event too! They were the lucky winners who won our blog give-away in year 2012! Their lovely miniature bears are so intricately hand crafted and precious!


Opposite our stand is Christina Metcalfe (A bear named Jack). Christina told us she is a fan of our works and blog! This really made our day at the show! Thank you for following us!

Christina's sold most of her bears and had a successful show, we are happy for her. Wayne took a picture with her and her favourite bear.
At the very first hour of the show, we had a collector from Germany at our stand. She told us that she could recognise us as she reads about Wayneston Bears from one of the German Teddy Bear magazine! The collector made us very happy, being our very first customer at the show! Jayven the mouse found a new mum and we took a lovely group photo with her. Thank you Ms Elisabeth Cohn for adopting Jayven!

We also had a very pleasant surprise when our dear friend, Irene Goh and her daughter, Sherlyn Goh, came from Singapore to visit us too! We were very touched to have great friends coming a long way to support us!

As there were simply too many tables for us to take photographs, we managed to take pictures of tables mostly from Halls 1 and 2 only.

Before the event ended, Wayne met Art Rogers at his stand. One of Art's bears, Orsin, stole Wayne's heart! Wayne decided to adopt him and took a picture together with Art and Orsin.

The organisers of Hugglets, Irene and Glenn Jackman were very friendly and helpful. They even gave us a complimentary UK Teddy Bear Guide Book.

Thank you Hugglets for having us at the Teddies 2016. We want to thank everyone who attended this event, making it a success.

Hope to see you again soon in the near future in London!

Hugs,
Wayne & Philip
*This article is written by Wayne and edited by Philip.
Posted by Waynestonbears at 12:45 AM